Another Quick Christmas Project and the Winner of the Briar Hat!

Hello Everyone! I hope you all are having a great week! So, I have been in project mode lately and after finishing up the pillows got to work on the burlap stockings, which I have pictures of posted below. First, though, I want to say thanks for all your sweet comments and e-mails about the pillows. They seriously were incredibly easy to do and I think only took me about an hour or so. I LOVE blogs that give tutorials. In fact, I am addicted to them - haha! If I had any clue as to what I was doing I would do tutorials for when I do easy projects like that. We have been asked before about that and the reason I haven't done them isn't because I don't want to. I love sharing ideas. I get so inspired by so many of you out there and love how so many of you so willingly show how you created things and share your sources -  it is one of my favorite things about discovering "blogland" - and certainly never would mind showing you how we did something. However, I normally am just "winging it" and making do as I go so I am not sure I would be very good at doing a tutorial. As my family can attest, whenever I am trying to explain something to them or they are trying to explain a project to me we often just end up exasperatedly saying "I will just SHOW you next time I see you" seeing how describing a project is not one of our areas of expertise! I do plan on making a few more of them and if I do I will try to take pictures as I go and maybe attempt to do a tutorial, but only if I can make it make sense and not sound completely stupid! For those who wondered what font it was - it really was just my handwriting - I didn't look at anything and just swirled as I went. I think you could get a stencil at Michael's or some other craft store, though and easily get the same effect and it would probably look a lot neater!

Monday night before I got to work on my Dear Lillie sewing I decided to make some new stockings. I wanted to make a new one for the baby and figured why not make some new ones for all of us. I had gotten some burlap for $3.99  a yard and a few buttons to play around with. I used an old stocking to trace out on the burlap and then cut out five sets of stockings. (I messed up on the first one so figured I would use that for an extra one and cut out four more). As soon as I started sewing Lillie woke up - arghhh! Poor thing has been sick a bunch lately. She had strep throat a couple of weeks ago and was finally better from that and came down with a horrible cold which has made sleeping impossible for her. Anyway, she was so stuffed and we couldn't get her to calm down and breathe so we just let her come downstairs for a bit. She, of course, wanted to "help". That is her new favorite phrase, "Help please, Mommy?" So, Lillie actually helped sew these. I let her press the "button", as she called it, on the sewing machine and away we went. After she helped sew the burlap together we put her back to bed and made the ruffles. I had a lot of Etsy work to do that night, though and picked up after that and then finished up last night by attaching the ruffles and buttons and then Lillie helped this afternoon when we put them on the mantle so we could take a few photos. She seemed very excited that she had helped make them! Once I put them up for real in a couple of weeks I will take some pictures where you can see the whole mantel. It definitely was another quick and easy project and I think it took me about two hours total to do the five stockings. But here they are for now:


I am a bit unsure about the bow. I think I like it but can't decide. I made two of these. 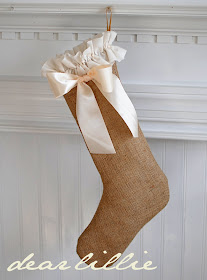 And this one is a bit simpler. I made two of these as well. I am thinking about adding a little vintage lace to the bottom but again am not sure. I figure I have a couple of weeks to decide before I put them up for real. 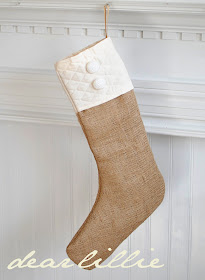 Close-up of the first one. I intentionally did not hem the ruffles. I love the frayed look especially with something ruffley. I think it keeps it from looking to "frou-frou"...okay I have no idea how to spell that! Is it "fru-fru", "frou-frou"....? I guess it is probably a made-up word anyway! Oh well! 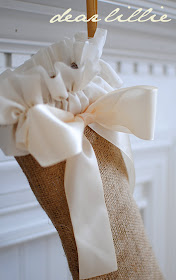 And here they all are! I can't believe we are going to be a family of four! (I am hoping someday we will be a family of seven or eight - haha - Jon hates when I say that but I really would love to have 5 or 6 kids......someday, not any time soon!) 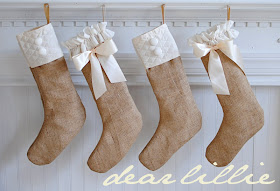 And here is the extra one that I messed up when I was cutting. In the end I think it ended up being my favorite, though! 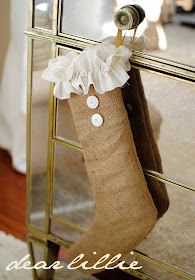 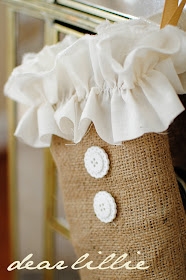 And now for the winner of the Briar Hat:
Paige and Jord 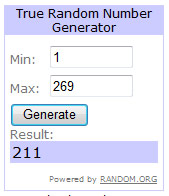 Congratulations and thanks so everyone who entered!
We will be hosting another giveaway soon so be sure to check back!
Also, we are just one sale away from 1000 sales on Etsy!
(As many of you who have Etsy shops know, that is actually not an accurate number as it doesn't count when people buy in quantities or custom orders that have multiple items in one listing, so we actually hit that mark several months ago, but it is still exciting to see that number up there!) Whoever that person is will get an extra little gift with their order!
Well, I hope you all have a wonderful rest of the week. William and Mary has their first basketball game on Friday against UVA so we will be headed up to Charlottesville for the game. We are so excited. Go Tribe!