A Few Fourth of July Touches 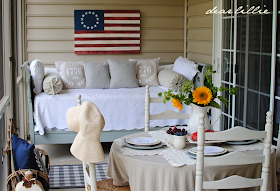 I have to say I don't think I have ever done any decorating for the Fourth of July. Partly, because I am a neutral girl so deep reds, and navy's just don't really get me excited, and partly because I don't think we've been home on the Fourth of July in quite a few years. I know the last three years we have been in New Hampshire and I can't really remember past that - haha! Seeing how we were going to be here this year, though, I thought it would be fun to just add a few temporary touches out on our porch. I knew it would probably drive me crazy in the house but out here I thought I could handle these deep colors at least temporarily.

The first project we did was go get a piece of wood at Lowe's that we had cut to be two feet tall and three feet wide. We painted it white and then taped off some stripes and painted them a deep red (I just mixed some black paint in with a generic red craft paint). Then I painted the blue square with a navy (which I again mixed some black in to darken a bright blue craft paint). The stars were a bit more interesting. I first just kind of guessed and freehanded them. Not a good idea! I didn't really think it through and although I got thirteen stars on in a circle, it wasn't a very good looking circle. It lasted about an hour and then drove me so crazy I painted over them so I could start fresh. The second time I made myself a little stencil, which worked MUCH better! Then once I was done I sanded everything down and then watered down some brown paint and washed it over the whole piece to age it a bit. It took a few hours but only cost about $10, which wasn't too bad. 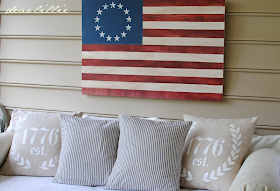 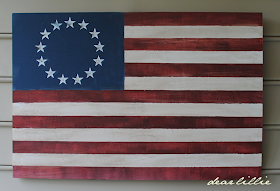 Then I added our 1776 pillow covers (which are now HALF OFF) and used some cotton blue ticking stripe to make some new pillow covers. 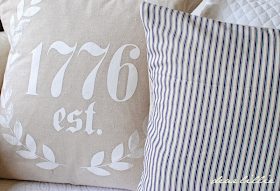 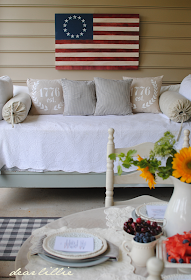 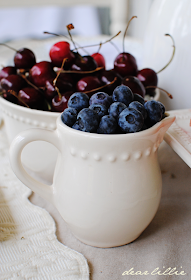 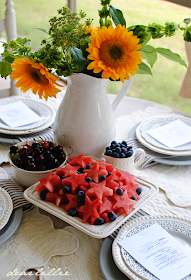 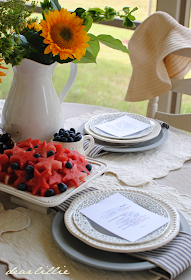 I used the leftover ticking stripe fabric to make napkins and then printed out God Bless America and added that on top of each plate. (You can get our FREE download of this by clicking here). 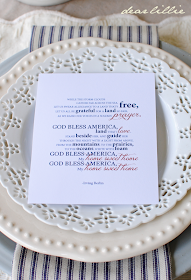 Underneath the God Bless American printout you can see we added a silhouette of George Washington onto each plate. Although, all in all, I wasn't thrilled with the overall look, I did like how this turned out. 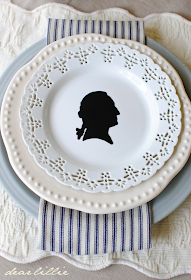 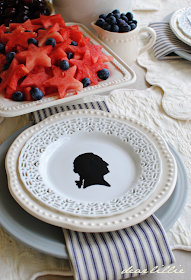 I also added a George Washington silhouette onto some navy pillows and placed them on the two side chairs. I was kind of annoyed that I wasted my time on them, though, because I wasn't that happy with how they turned out. 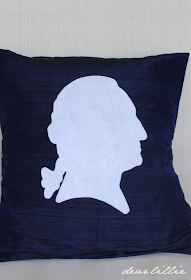 Then I added our navy 1776 pillow cover (which is also now HALF OFF) and a smaller ticking stripe pillow to Lillie and Lola's little bench. 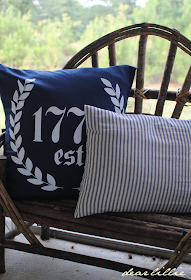 Here's a little God Bless America on a chalkboard behind the little round table between the two chairs. 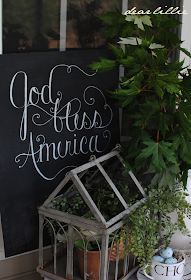 And another George Washington silhouette. 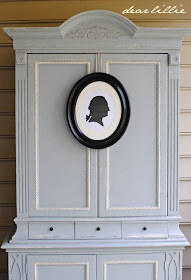 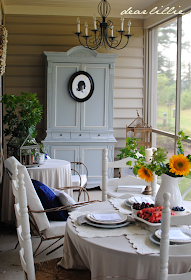 I also printed God Bless America (click here to download it for FREE) on a 8.5 by 11 piece of cardstock and added it to an easel on the little coffee table out there. 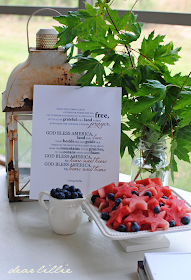 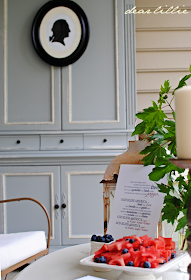 All in all it was an inexpensive way to add festive touches (I just purchased the wood for the flag and one yard of ticking stripe, I had all the other supplies) but I have to say I will be happy to turn it back to what it looked like last week.


I hope you have a fabulous Tuesday! 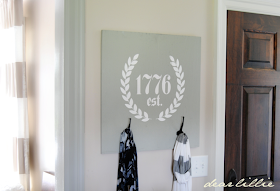