Making over our Kitchen Cart 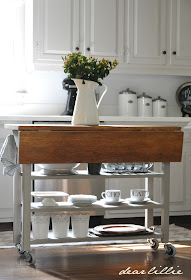 When we first saw the kitchen in our new house I was hoping we would be able to add an island. After we went back to visit the house a few more times and took measurements I realized we really weren't going to be able to fit a real one. Shortly after we moved in we put this kind of random bookshelf type piece of furniture up against the wall in our kitchen. This was one of the pieces I had been hoping to get rid of once we had settled in. I purchased it for about $20 back for my first apartment post-college and gave it a quick coat of white paint. It made it with us to our first apartment after we got married and then came along to each of our first two homes. I never really liked the piece that much but it just kind of hung around. I kept things like my cook books on the shelves and it was fun decorating the top. It was a functional piece but I always thought it was a little blah looking. When we were painting the kitchen I moved it away from the wall into the center of the kitchen so we could paint the trim and realized that it actually fit nicely size-wise as kind of an island type kitchen cart. However, it was several inches too short and not that easy to move around. At first I started looking for a piece similar in size that had a more industrial feel to it but couldn't find anything reasonably priced except for an IKEA one that was okay, but I didn't love (although ironically I did end up getting it to try and that is what is in our kitchen right now as I am typing this which I will explain about in a minute).  Although I found a few pieces that had the look I was going for they were quite expensive so I decided to see if I could transform this piece seeing how it was the right length and depth. 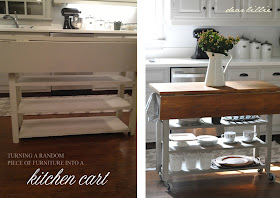 The first thing I did was strip the paint off the top of the piece. I brushed all the gel on and then waited a few minutes for it to do it's magic. 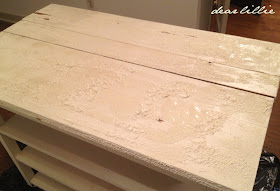 For some reason I kind of like seeing how all the paint starts bubbling up like this. Once it was ready I just used a scraper and scraped it all off. It took two coats of the stripper but wasn't too difficult of a process. 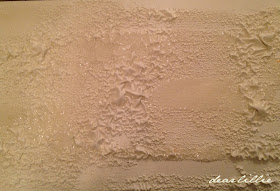 Once that was done I sanded the top down. You can see the difference from the left where I had already sanded and the right side that I had not started on yet. 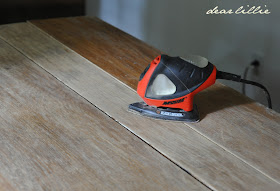 Then I used this stain in the color "Provincial" and stained the top. I didn't seal it because we will just be using it as a storage piece and won't be doing any food prep on the island. We have plenty of counterspace for that. 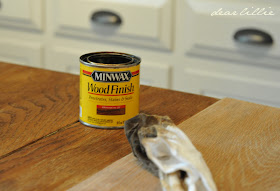 That after that I put a fresh coat of paint on it. I used Shenandoah Taupe because I had plenty of that leftover from a previous project from our old house. Then I added a little hook for dish towels and that was it for the main part. 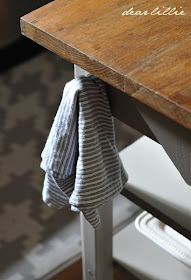 The extra part was adding wheels to help give added height. I have no advice on how to put those on though. I had no idea what I was doing. I should have taken the time to look online for some kind of tutorial but I figured it couldn't be that hard. Well, it was a pain in the neck and honestly I tried a bunch of different things and although I did finally get them I have to say it was a mix of a bunch of random different things I tried. Next time I will take the time to do a little research first. =) The good news is they helped add a nice amount of height.

It's hard to tell in this photo but the island is several shades darker than the cabinets and trim. I will be showing our full kitchen early next week and also will be doing a post on the things I've learned about painting cabinets and how we painted ours and what we used and all that good stuff. 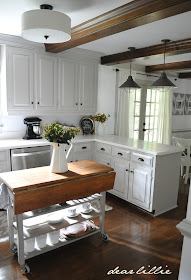 It certainly is starting to look brighter in our home now! This is what that angle looked like when we moved in: 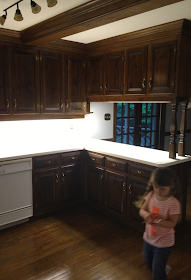 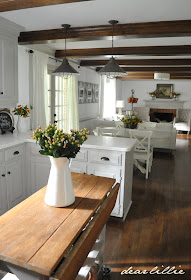 The cart lasted in the kitchen for several weeks. I had purchased the inexpensive metal IKEA one before I made this one over and was torn on whether I should still try and put it together and use it out on our porch. Seeing how we moved the farmhouse table that was out on the porch into the dining room we just have a small round table out there now and I thought it would be nice to have a place to kind of act as a serving piece out there to keep all the food on when we were eating at the small table during these summer evenings on the porch. I decided to go ahead and put the IKEA one together and when I did I ended up thinking it would still be fun to try it out in the kitchen. Although I like this one here I do think it made our kitchen a little more "country" looking than I was hoping. I tried the IKEA one and Jon liked it better so for now we are keeping that metal one in the kitchen (you can see that one in the photographs I will be sharing on Monday) and we moved this one to the dining room for now seeing how it's pretty bare in there. I've been on the hunt on Craigslist and in our thrift stores and antique shops here for a sideboard to fix up and once I do then we will either move this to the porch or move it back to the kitchen and move the metal one to the porch. It's been kind of a musical chairs game here except with dining room tables and kitchen carts. Pretty confusing, I know! But anyway, for now as I am typing this up the cart is temporarily in our dining room. 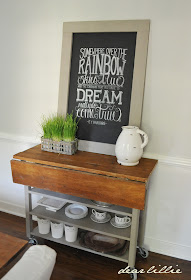 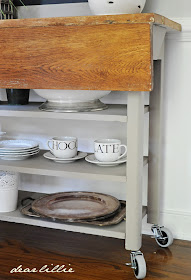 Well enough on that! I plan on being back next with a little makeover I did to the brass chandelier in our dining room. I hope you have a blessed rest of the week!